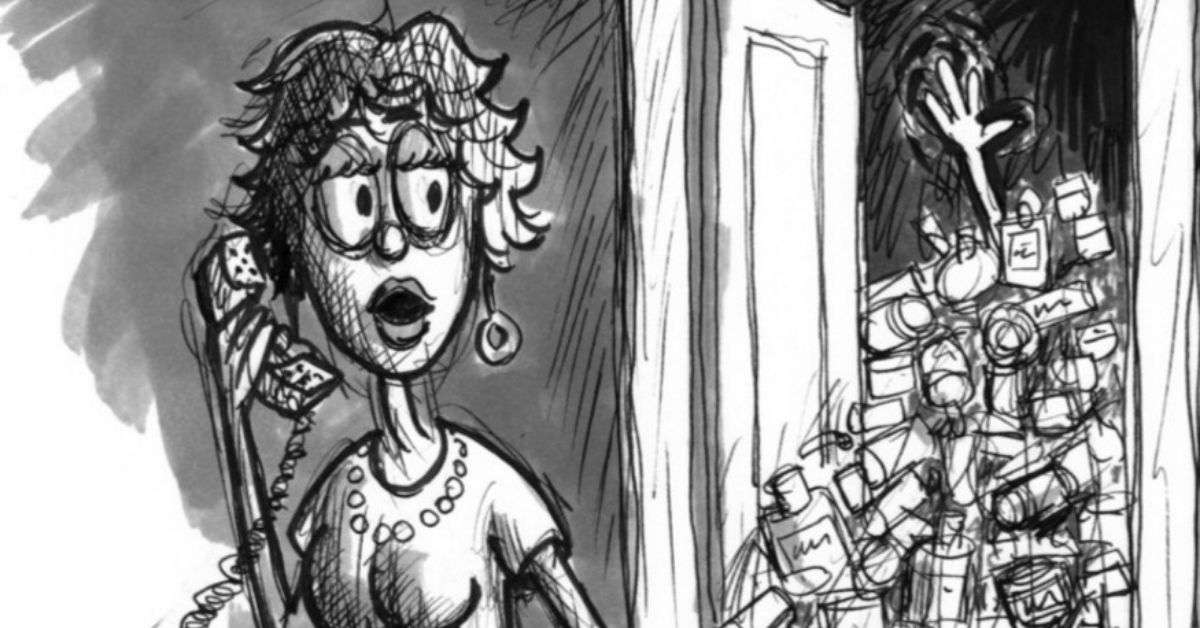 “When released into the bathroom, feminine toiletries, hygiene and skin-care products will expand both in number and volume so as to take up all available shelf space.”

One of today’s most insidious, yet largely unrecognised, domestic issues is that of lotion-sickness. It’s caused by make-up migration, the phenomenon witnessed in the invasion of bathroom shelves by feminine beauty-care products. Men find their personal hygiene habits marginalised through the annexation of all available shelf space by products with names they can’t spell let alone pronounce.

I mean, what on earth do you do with Doux Nettoyant Moussant, Lift-Minceur Visage or Doux Gommage Polisant?

While researching the issue I discovered its prevalence and more alarmingly, the incidence of suffering experienced by men. While women are the carriers of the disease, its adverse effects seem to infect only men.

As a first step in the rehabilitation of my aromatically challenged brothers, I feel we should bring the issue out into the open and start a support group.

Then have the condition officially recognised at Parliamentary level by having a Ministry of Men’s Aromatic Affairs set up — and push for a Chair of Men’s Hygiene Studies to be established at an accomodating university.

After many long hours of consultation and research we can now describe the phenomenon in the First Law of Lotions;

“When released into the bathroom; feminine toiletries, hygiene and skin-care products will expand both in number and volume so as to take up all available shelf space. When left to find their own level, they will multiply exponentially to eventually fill a large cane basket at the end of the bath. They will displace all male toiletries, which have to go and find a tiny space for themselves in the cupboard under the basin.”

This is why men smell.

They can’t find their deodorant or tube of anti-fungal cream among the endless columns of moisturiser and make-up remover which, row upon row, recede into the darkest corners of the nation’s bathrooms.

There is evidence of men being found in the kitchen, fossicking desperately under the sink for oven-stick or fly spray, anything that will be a passable substitute for underarm deodorant or after shave.

This is also why men get a bit whiffy in the car. There are tubes of feminine gooey stuff in the centre console, taking up all the space on top of the garage door remote.

The issue is compounded by the vast variety of products available, all named in a foreign language, French being the most pervasive.

But women don’t merely have these in one colour, they have the entire visible spectrum covered. Immediately multiplying the quantity of everything by seven, or nine if you include the black and white versions which were bought for face-painting the kids before an All Blacks test match.

Then we move on to the eyes. For this, women have mascaras, eye shadows, eye liners, eye-brow pencils and a host of mysterious appliances for plucking, curling, straightening and extending things.

Proliferation is greatest among hair-care items. Things in this category are inevitably bulky, involving detergents, surfactants and stuff which replaces the stuff removed by the detergents and surfactants. They all seem to involve body and bounce, words which in themselves hint at a lot of room.

Then of course there is waxing equipment. This is the most mysterious of feminine beauty-care activities. Previously a depilatory process confined to legs, it is a practice conducted only when the bathroom door is firmly locked. It has never been observed by men. Apparently there are also electrical appliances used for the same purpose, designed by former KGB agents.

Most of the above unguents are applied on a daily basis and have to be removed within 24 hours. Naturally, therefore, there is a special proprietary remover for each, which for all practical purposes, doubles the number of items already on the shelves.

The situation is further compounded by the fact that these products are fashion items, diminishing in popularity before you can say “That’ll be $500 dollars please.” Consequently at least half the potions are redundant before their use-by date and they lie, half- squeezed, at the bottom of the aforementioned cane basket.

We haven’t even touched on hands and nails. Sufficient to say that hand lotion creep spreads far beyond the bathroom. Manicurial items have a mercurial knack of turning up in cars and on coffee tables.

No doubt the scope and scale of the problem is now becoming apparent to you.

There is an average of 16,837 different items in a woman’s beauty-care portfolio. A man has 7 items if you count the atomiser bottle of Hugo Boss after-shave he bought duty-free, on his way to watch the Rugby World Cup.

The 7 basic items include; a razor, a can of shaving cream, a deodorant of some description, a bottle of Listerine from the supermarket, the duty-free after-shave, toothpaste and a toothbrush with a flexible handle. Maybe it could stretch to 8 items, if you also count the can of athlete’s foot powder, which sits awkwardly on the bottom shelf, alongside the toilet cleaner, Band-Aid packet and bottle of Dettol disinfectant.

Having finished writing this missive I passed it to Mrs Hutcheson for fact-checking and proofing. She tells me it’s a load of rubbish. I am now reliably informed, that had I been paying attention in the past two decades, I would have known of the vast range of male cosmetics available.